Iceland, Ireland and now Greece all over the news. But what about the UK?

In 2008 Iceland was in big big trouble, financially. They're still in trouble today, and it'll be some time before life gets "back to normal" (a "new normal").

Next it was Ireland in 2009, having to face stark economic realities. They took the challenge seriously and started to face up to it. It's by no means over, but at least they are dealing with the issue and they will recover fairly quickly if they continue as they are lately -- cutting public services budgets meaningfully, and public sector workers accepting meaningful pay cuts and some job losses.

At the end of 2009, Greece was highlighted next as having serious problems with public debt levels, and the scale of their public sector budget deficits. Their credit ratings have been recently reduced, with further rating downgrades coming down the pike (resulting in higher borrowing interest rates for their government, thereby further exacerbating their budget deficit and their future public debt level). They are publicly speaking of dealing with these problems and reducing their deficits and debt over the coming months and years, but frankly nobody believes a word they say. A knock on the door of the IMF, and an enforced period of austerity and relative penury, seems to me to be a matter of months away for the Greeks now.

However, take a look at the chart below, from Moody's Investor Services (one of the three main international credit rating agencies). This shows their "misery index", composed of each country's budget deficit level and their (official) unemployment rate. As you can see, on a combined score we are actually in a slightly more miserable position than Iceland! As an interesting observation while we are discussing this, check out the top line entry, for Spain -- which few people are talking about. There is a heads-up for you, if the Spaniards were not already on your radar for the future news pages...

Anyway, back to the UK again. Check out the budget deficit component of our line on the graph. Now compare that with the same section for all of the listed countries. Notice anything?

If you are one of the many, many people who blindly believe "it can't happen here", and you believe that life will indefinitely continue exactly as it has been during the recent past: you ain't seen nothin' yet, please prepare yourself for a harsh lesson in reality sometime. Special emphasis on the word "prepare". Don't forget the Icelanders, Irish and Greeks all thought it couldn't happen there either. 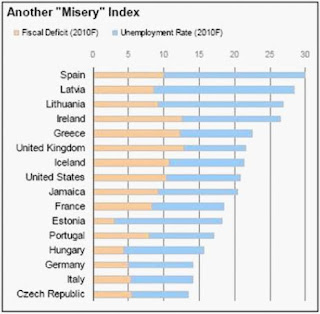