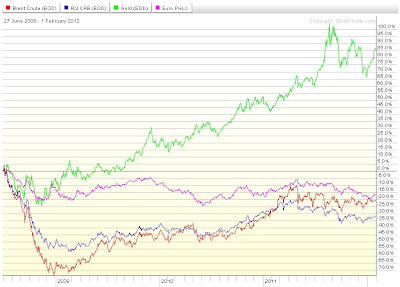 Gold prices the dollar, the dollar prices everything else.

Except the euro - which prices gold.

"Marked-to-Market gold at the ECB, in action!"

You won't find that at the Fed.

"Marked-to-Market gold at the ECB, in action!"
You won't find that at the Fed

Hum. Let me rephrase this in a simpler form.

With these type of graphs one looks for patterns and see if cause and effect exists. If one sees such a pattern, such as gold leading upward moves, where after the rest excepting gold declines, as in the graph above, one may speculate explain the meaning and speculate as to the reasons.

DP has pointed out that a meaning is that gold is being revalued against the euro. He has speculated that it may have been done intentionally. And. He has not provided a possible reason for this happening.

Great comment, thanks for stopping by and sharing a little of the love, Motley ;-)

Here is another view of the same thing, but looked at from the other side of the same (euro) coin.