This is "inflation", not the rise in prices which follows it as you are made to believe.

I tried and failed to locate a long term historical data series of UK M4 (broad money) stock. The BoE does publish a historical series of quarterly Year-over-Year percentage rate of change data in their inflation report though, so I decided in the absence of anything more accurate I would have to take a recent baseline value for M4 money stock (2009Q4, highlighted in bold in the worksheet) from National Statistics and then compute the preceding 25 years worth of quarters backwards from that, using the BoE's quarterly Y-o-Y rate of change number to get the (rough) back data set.

Then I asked Excel to graph those numbers, and finally added an exponent trendline to project forward the data 25 years (the same period as I now have, rough, computed data for). To anticipate the question "why would you use an exponential trend line?", please observe how the trend line extremely closely matches the path of the blue data set line on the graph. 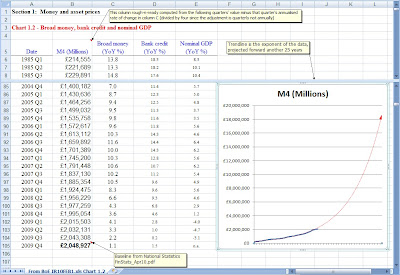 Bear in mind the Bank of England was set up in 1694, so it took 291 years to go from approximately nothing to the value you see at the start of this data, in 1985. Mentally project the line back on this basis and you can see the trajectory of the exponential curve would very likely pretty much match the data here too. You might consider it to be further confirmation that a gold sovereign coin originally was valued at £1, but today it will cost you upwards of £180 (and counting) to buy one.

I do have to concede that the data is not 100% accurate, but this is as close as I have been able to get to so far. If you happen to have the accurate historical set of M4 for a long time period such as this, please get in touch with me because I would appreciate it.

In the absence of a meaningful change in the monetary system, you can see why I might prefer to move any available capital from £'s into any asset class that benefits from inflation rather than being eroded by it. Bonds would qualify for the diametrically opposed category, but watch as the government attempts to forcibly corral as much money as possible into bonds, perhaps by stipulating that pension savings must be at least partially invested in bonds ("for your own safety" :-\ ). This is because any reduction in the demand for bonds will force up interest rates, which is incompatible with their idea to spend money they don't have on nice social policies through massive budget deficits, and also keeping property prices inflated which is good for voter morale as well as helping keep the wheels on the spendthrift consumer economy we enjoy these days.

Let's hope that someone can do something meaningful to change the trajectory of that data, and stop us buying rubbish from the Chinese that we don't need, with money they lend us. But in the meantime, caveat emptor.

You can have a copy of this Excel file if you think it would be useful, from here.
Posted by DP at 13:25