PIMCO are the biggest bond investment managers in the world. If their fund manager Bill Gross decides to buy or sell something, the market is going to get moved by it whether it's fundamentally correct or not. Yesterday he updated us on his opinion of the direction of the UK government debt "Gilt" market:

“Action is required to maintain or regain trust in sovereign credits approaching the rocks. Just last week bank of England governor Mervyn King said that it would be difficult to cut spending quickly, but that there needs to be a clear plan for doing so. Not good enough, Mr King. Don’t care. Show investors the money, not vice-versa.”

(See link at bottom of this post for CityAM article on this.)

I refer you back to my recent post on the possible fate of the Pound in 2010, here. You may be interested, as I am, to check back in on that chart to see how things are looking a couple of weeks on... the short answer is "not so great". 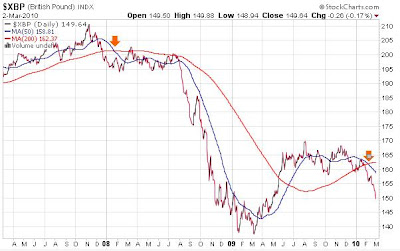 Now for the slightly longer answer then. The 50-day moving average (50DMA, the blue line) is now distinctly below the 200DMA (the red line), confirming this is a crossover trend change (from up to down) and not a test of support before continuing the previous trend (up again). Short term it is possible (likely) there is a reprieve in this new trend, with a return to the 50DMA blue line before continuing to fall (indicating a strong down trend is likely in coming months) or a return to the 200DMA red line before continuing to fall (indicating a down trend potentially of lesser magnititude is likely ahead). Of course, it is still entirely possible the black line will cross over both the blue and red lines and head on up into orbit with the Pound ending up at $3, who can say?

I'm sure I'll be revisiting this chart again in coming weeks to check in on progress... hopefully at that time the Pound isn't down to $1.25...


http://www.cityam.com/news-and-analysis/pimco-action-not-talk-needed-fiscal-deficits
Posted by DP at 09:45