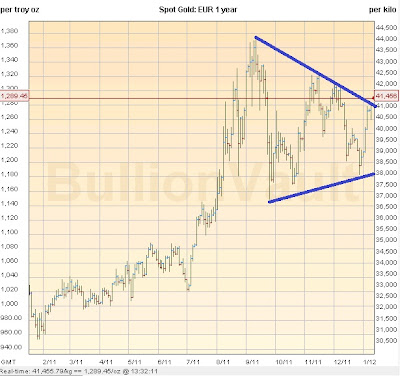 I can see one potential outcome, where $GOLD is repelled by the upper trend line, bounces off the lower one,  then breaks out of the wedge (to the upside).

I can also see as this is happening, €GOLD could drop back to retest and confirm the breakout of the upper trend line on its recent wedge, before taking off.

Perfect place to hide a currency-printing devaluation, a recession.

Especially if you happen to have one, and only one, mandate: to weaken/strengthen your currency, so that its value tracks down/up with general consumer goods prices.

Be kinda handy right now, for the ECB with just such a single mandate, if there was a decent recession about now, to stifle demand for goods and therefore show excessive strength in their currency - that they would be forced to counteract, due to that single mandate.

The thing with the euro is, 'it's just THERE'.

You can fold it into your wallet and forget about it. You don't have to worry it'll significantly lose value against stuff you'll need. It's designed from the ground up to track consumer prices, up and down, allowing prices to increase at a steady 2% per year (not so much that it's problematic, but sufficient to prevent cash hoarding, which would suppress economic output - look at the 1930's to see how that works out). If you doubt this is a feat that is even possible, check out the rate of consumer price inflation since the inception of the euro - over a decade at this point. It has managed to achieve this goal successfully across that period, even as other economies have suffered much greater swings in prices.

If you have long term savings, where this ~2% a year decrease in real value is not acceptable to you, you can simply follow in the footsteps of the ECB themselves -- and buy gold as the premiere long term store of value. It's all there, right on the first line of their regular balance sheet statements, asset number 1 gold, marked to the current market value. Simples.

Compare this to the other major currencies of the world. For example, right now CPI is around 5% in the UK. In the US it's even worse. Japan has suffered through a deflationary depression for over 20 years and counting. You'll also discover gold isn't the Bank of England or Bank of Japan's number one reserve asset - their's is foreign currency, predominantly US dollars. Even when you look at the US Federal Reserve, you'll find that they don't have gold as a meaningful asset on their books.

Get with the program. Follow in the footsteps of the only major Central Bank that really knows what it's doing. Save in gold. Trade in currency.

But but but... isn't having other people's currencies as your primary reserve asset the very best idea???

Ha ha. Yeah, sure. If you want to subjugate your own monetary policy to the control of your neighbour. In which case, knock yourself out! (Before they do it for you.)

"the dollar is our currency, but your problem" John Connally, US
Treasury Secretary, 1971.