How big of a debt mountain has the UK got to climb today?

I thought it might be interesting, since I haven't found it anywhere else so far, to take a quick look at the gap between the UK M0 and M4 monetary aggregates of today. The bank, handily, publishes a series of recent data on these things, going back a couple of years -- not as good as a real long-term picture of what they've been up to, but definitely better than no data at all!

I had to get the "notes and coin" and "bank reserves" numbers and put them back together to get old-school M0, since they split these two numbers out in 2006 for better or for worse (or just to blur the monetary trail, perhaps?). Then I put the M4 numbers behind that reassembled M0 aggregate, on a graph. You can see it for yourself just a little way below here.

The thing I was interested to see visually, the reason I have decided to do this today and put it "out there" for anyone else who might also be interested, is how much of the UK's broad money supply (M4 - cash plus bank credit) is actually just hot air credit (banker promises based on money they don't have) and how much is cash (the stuff we could all take out of the ATMs and spend). The red M4 area towering over the black M0 "cash" monetary base, is the spoils of the Magic Never-Never Tree of Money that we have all collectively borrowed from the future over the last few decades since the Seventies. We've spent this money, and as you can see on the graph it is still trending up, but have yet to pay it off (which would show the gap between red and black contracting). It's money that doesn't really exist yet, but will need to some day, unless much of these current debts are to be defaulted on.

In order to bridge this gap, either the "printing presses" at the BoE are going to have to "run white hot" for some time, leading to the likelihood of an inflationary fire running through the economy, or much of this credit is going to be destroyed through defaults, leading to a deflationary holocaust. Interesting times we live in. 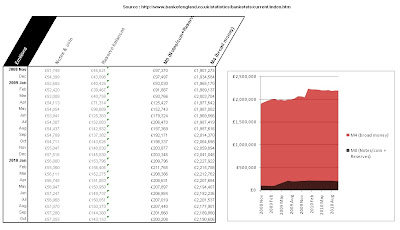 Click the image to see a larger version
Posted by DP at 14:21

Check out the top and bottom line of the Reserve Balances column! Woah boy!

So... just where did these mystical reserve balances of base money come from, eh? The amount of base money the banks have on reserve has basically trebled over this graphed period.

In order to bridge this gap, either the "printing presses" at the BoE are going to have to "run white hot" for some time, leading to the likelihood of an inflationary fire running through the economy, or much of this credit is going to be destroyed through defaults, leading to a deflationary holocaust.
What you said!