The price of real value 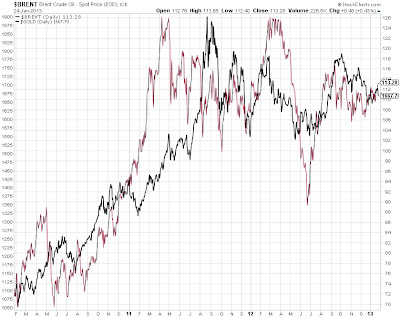 Shown above is a chart demonstrating a fairly tight correlation between the US$ price of Brent crude oil and gold, over the last three years.

Crude oil is the major input to all economic activity today — powering equipment for the production of foodstuffs; anything manufactured with machinery and/or containing plastics; anything transported long distance from where it is produced to market; any activity where the staff producing it have to travel to get to their place of work; etc. Nothing is more significant to the cost-base of everything traded in the world today. Of all the benchmark markets for the trade of crude oil, Brent crude is the most representative of real world trading, hence I have used this rather than $WTI for the chart.

If there were a tight correlation between Brent crude and the US$ (i.e.: there was price stability in US$ terms) then the line on the chart would be broadly horizontal. But what we can see is, clearly, that the prices of both Brent crude oil and gold, in US$ terms, are generally rising and doing so at a fairly similar rate. Or to look at that another way, that the value of US$ is steadily falling against both of these benchmarks of real world trading. We could also have tried charting the Brent crude price in another currency of your choice, but the picture would have been pretty much the same — because all currencies today are traded against each other and move broadly, like a herd, in the same direction: down.

To further illustrate this point, below is another chart, this time showing the ratio of GOLD:BRENT, which as we can see (taking into account the small range of values on the Y-axis) is broadly stable. The blue line is a 200 day exponential moving average of the ratio, which we can clearly see is meandering around the 15 level, marked by the red horizontal line.

To summarise what the chart is saying: over time one troy ounce of gold is traded at the same value as approximately fifteen barrels of crude oil.

Real world trade is taking place denominated by broadly stable exchanges of goods in terms of real world value, rather than in stable US$ pricing. This is how trade has really taken place for millennia.

People mainly save in currency today, thinking they are preserving their purchasing power for the future. But the purchasing power of currency is, demonstrably, anything but preserved over significant periods of time. If you have savings to preserve the purchasing power of over long periods, rather than current balances that you are setting aside in readiness to make payment on your short term commitments ... please consider storing those savings in something other than currency. Spend the cash on a real world asset of enduring value, then forget about it until such time as you may need to convert it back into cash in the future. This is how to preserve the value of your savings for the long term, in real terms.


You may have fewer choices later.

Obviously you are saying BUY Silver. It's the better deal. You get more ounces for your dollar.
jojo

Actually, why not take a look at the comparable 3 year ratio of SILVER:BRENT - why not!

Easy to see how one might be taken in by the SLA.