I have 3 issues with the article the Telegraph put out this evening by the same title as this post (link below).

1) Obama needs to get monetary policy the hell away from Larry Summers:

Mr Summers said it would be "pennywise and pound foolish" to skimp just as the kindling wood of recovery starts to catch fire.

Mr Summers is in thrall to the banks, and he is just saying what is good for the banks so they will continue to look after him, not saying what is good for the remainder of the US. I don't care who you are, a deadbeat family or the "richest nation on earth" -- if your problem is you owe too much money, stop borrowing and pay off that debt as quickly as you can, any way you can. That is the only rational answer, and it is the complete opposite of what Summers is proposing.

2) Contrary to what Tim Congdon says in this article, Bernanke totally does look at the quantity of money in the US financial system. It is just preposterous to seriously suggest that the Fed do not take any notice of monetary aggregates. He stopped the Fed reporting M3 because he didn't want to continue drawing high-profile attention to the message the M3 numbers were about to tell and continue to tell to this day. The M3 numbers have been telling everyone the US (and therefore, by extention the rest of the world since the US dollar is the overwhelmingly dominant world reserve currency) we are heading for deflation as a result of widespread credit destruction, and they continue to do so. If the Fed are not looking at the aggregates at all, why didn't they stop publishing all of them? Why just M3? I'll tell you why, because it's the broadest measure of money (cash + credit) and the likes of M1 and M2 are much narrower because they do not include credit, only cash and near-cash items like money market mutual funds, bonds, and certificates of deposit. The problem we were headed for was a massive round of debt defaults, such as residential and commercial property mortgages for example. That is why M3 ceased to be reported, nothing to do with Bernanke not wanting to see this number personally.

3) Paul Ashworth at Capital Economics surprised me with his ignorance at the end of this article when he stated:

Mr Ashworth warned against a mechanical interpretation of money supply figures. "You could argue that M3 has been going down because people have been taking their money out of accounts to buy stocks, property and other assets," he said.

It seems to me that if someone takes money out of their account and buys stocks, property or other assets, then they buy them from someone else. At the end of the chain of transations what will happen is that someone will take the cash and put it in their account — so how can that alter M3? All that happened is the "money" moved from one party's account to another party's account. I am totally amazed that someone at a respected outfit like Capital Economics would publicly say something as basic and indisputably wrong as that. What hope is there for the rest of the financial world if even gurus like that don't understand what they're talking about at such a rudimentary level..?

http://www.telegraph.co.uk/finance/economics/7769126/US-money-supply-plunges-at-1930s-pace-as-Obama-eyes-fresh-stimulus.html
Posted by DP at 22:14 No comments: Links to this post

Today Spain approved its own €15bn "austerity plan", in a bid to avoid the debt market disaster that Greece feel victim to. This is a much smarter plan, if you ask me. But don't get me wrong, it won't be enough to keep the wolfpack away. But they will probably make off with a much smaller chunk of Spain's flesh than they got from Greece.

Of course, the Greeks have already greased the path for Spain, Portugal, Italy, Ireland, France, and everyone else in the eurozone, so it's a much easier decision now to bite the bullet quickly and make a start on "dealing with" those unassailable national debts.

Dubai reach "agreement in principle" on bank debt. Model for the rest of the world's debt restructuring?

The BBC article I just read on this topic is short on detail (link is at the end of this post). For example:

Dubai World, the state-owned investment vehicle, says it has reached an agreement "in principle" with most of its bank lenders to restructure debt worth $23.5bn (£16.4bn). It added it would be left with debts of $14.4bn after the restructuring.

The alert among you might be asking the same question that I am at this point: What happened to the other (approx 40%) $8.9bn then? Is this a partial default, or what?

Later in the article we have something that I for one find *very* interesting:

The terms of the restructuring, include converting $8.9bn of government debt into equity.

So it seems like they are looking to convert almost half of their debt commitments into equity commitments. On the little information we have available here, and the reality that surrounds us in the world right now, that looks to me like a pretty sweet deal for all concerned!

With the world's debt problems as deep they are, I am sure that stopping the bleeding of paying interest on those debts is the answer to the conundrum. For example in the UK we are paying £30bn+ per year just on the interest of our national debt. This is ludicrous! We have politicians arguing over the ability to afford a few £billion in public sector budget cuts, and meanwhile none of them is talking about the £30bn+ that is, literally, wasted on debt interest each year. That is about the same size as the budget for lawℴ and safety (police, firefighters, courts, etc). This is just madness!

We (and the rest of the world) will *never* be able to repay these debts in full [with honest money]. The simplest way to achieve that goal of ceasing the interest payments (short of simply defaulting, or hyperinflating the currency into oblivion) seems like it would be to have the bondholders agree to convert the debts into equity, like the holders of this Dubai debt are - so they will no longer receive the steady interest payments on the debts for the duration of the loan period, but they will instead receive their share of the distributed profits from whatever entity their equity is granted in, indefinitely.

This seems to me like the holy grail for both the debtors (who will otherwise never escape their debts honestly) and the creditors (who will never see all of their money back, in real terms) alike.

Whatever happened to the Iceland financial crisis?

It was all over the news (including here!) not so long ago. Gordon Brown protrayed it as an act of terrorism in order to freeze the Icelandic assets that remained within UK jurisdiction. People there were storming the parliament in protest (not so dissimilarly to the people in Greece protesting now actually).

However, you don't hear anything about it now. Life is slowly returning to normal there, based on the little that we do hear. (Aside from that small matter of the inconvenient volcano of course.)

The thing that happened is the people of Iceland rose up and said NO to the bankers and their bailouts, so the Icelandic government has defaulted on its external liabilities. And that was pretty much the end of the matter! Before it happened, you would be told that this defaulting on obligations spelled total and final, catastrophic economic ruination for the entire country, and it should be avoided by any means possible.

Amazing how these financial disasters have a habit of blowing over and it turns out life does continue after all. Perhaps we should stop worrying so much about all those unpayable national debts we've racked up in the UK after all. Perhaps deficits really don't matter... we can just blow a raspberry at the creditors, like the Icelanders, Argentinians, Russians, and all the others before us.
Posted by DP at 18:08 No comments: Links to this post 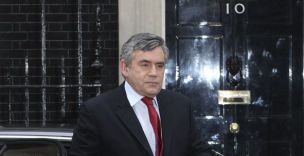 The problem with democracy

The problem with democracy, is that most people's vote is for sale as long as they will get some of the free bread at the circus you propose to put on today at tomorrow's expense. Political parties are forced into a race to buy your vote, with more and more outrageously unrealistic and unaffordable promises.

In Greece today, three people have died because mobs of angry protestors stepped far over the line separating peaceful protest from barbarity. They are angry that the supply of free bread, which they have by now come to accept as a right, has run out and the bill for many years worth of bread has been presented for imminent payment. So they are throwing around the toys in their pram and have brought the entire country to a standstill. It would appear some of those toys might have been Molotov cocktails... what wonderful, rational beings they are.

This is what redistributive economic policies bring about, eventually. Nothing is free, everything must be paid for at some point in time -- and the longer you put off paying for it, the more painfully expensive it will be. Think about that carefully tomorrow, when you're in the voting booths across the UK.

Orwell's Ministry of Truth alive and well in Brussels

In George Orwell's classic novel 1984, the government's Ministry of Truth made a living out of rewriting facts to suit the Party's agenda.

Today we can clearly see that the Ministry of Truth is very much alive and well, and its central office is in Brussels. Government's getting bad scores at school? Well, we'll just have to change the scoring system then won't we!

According to Bloomberg yesterday, the European Central Bank (ECB) have stated they will accept Greek government bonds within their asset swap program, regardless of the fact that the credit rating on those assets does not meet the stated requirements for the program. http://www.bloomberg.com/apps/news?pid=20602007&sid=aTAygysllnxM

On 4th March 2010 I said "I smell a back door bailout of Greece here". To my mind, the Bloomberg story above appears to confirm this theory. In which case, the ECB just lost itself the reputation for fiscal prudence it had enjoyed up until now, and the euro will not be rebounding against the Dollar any time soon.
Posted by DP at 09:34 No comments: Links to this post