Hyperinflation has already happened. We the people requested the bankers to issue more credit money. We can try to pin the blame on bankers, but at the end of the day the reality is they could only lead a horse to water. It only drinks if it wants to.

The bankers resold these loans to others, who had equity and were happy to exchange it for debt securities with a yield (creditors -- depositors and investors). The creditors gave up their equity, but the key point is that they still considered it their equity. The debtor also took that same equity and spent it into the economy somehow or another (why would they pay interest to stick it in a shoe box?).

The same equity appeared as an asset on the balance sheet of two parties in the system -- a physical impossibility but money isn't physical, it's just an idea.

So the amount of "money" in the system has been expanded, but prices didn't go up significantly as a result, because the creditors couldn't spend a debt security until the underlying base money has been repaid to them. Again, the equity is being counted twice in the system, with the debtor and the creditor both laying claim to it. The hyperinflation has already happened, but it was disguised by the locking up of equity into debts. Through creditors being led to believe their credits were assets.

In an expanding economy this doesn't seem like a big problem, because the debtor is reasonably expected to eventually over time work it off and repay the equity (base money) back to the creditor. The creditor gets repaid extra equity for the inconvenience of his foregone consumption, in the form of the paid interest, while the debtor was happy to be able to bring forward future production into the present. Everyone's a winner. Until everyone's a loser.

The problems only come in a recession, when large numbers of debtors (or large debtors, like say a sovereign nation or two perhaps) find they can no longer support the repayments on their debts. The creditors won't willingly accept that their equity is actually gone when the debts default.

So the Central Bank has little political choice but to issue new equity (base money) into their system and swap it with the creditor for its defaulting debt securities. "The debt for equity swap". This doesn't result in an increase in the overall money supply, just the equity (base money, M1) part of the total money supply (M3/M4) is now a larger percentage of the same total. The credit went to money heaven, but the creditor was made whole to prevent them withdrawing completely from the system.

All equity holders have been diluted out by this process, just like a business issuing new shares to the directors and their friends. The loss is socialised across all of the equity holders, who each now hold a smaller percentage of the increased total supply.

But, on the plus side, deflation and bank runs have been averted. Phew! No depression. So far, so good...

The difference between base money and a debt security, to the holder, is that one can be spent at will while the other cannot be spent until it is either sold on to another investor in exchange for base money, or held to maturity and fully repaid. Swapping credit money for base money means that there isn't more money overall in the system, but base money makes up a larger percentage than before. More base money is able to chase after the same amount of goods and services. Velocity increases.

Hyperinflation of the money supply has already happened. The musket was already packed.

QE is unlocking the failing credit (debt) part of the money supply by converting it into base money (equity), in order to prevent total economic collapse. That's lit the fuse. More of the total money stock is out in the wild, and it's only a matter of time before velocity will increase.

The fuse will continue to burn down until the point in time when the widely held fear of deflation is seen as the political impossibility it always was, and sentiments reverse. The recession will finally be over, but the problems will really just be getting started.

OK, how about some evidence to back this up you say? 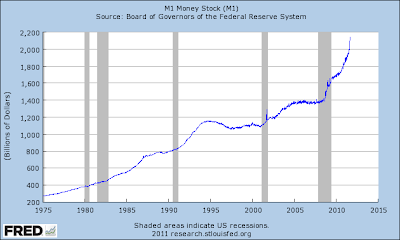 As we can see, courtesy of the St Louis Fed,
M1 (base money) has been ramping


Interesting to see M1 and M3 graphs cheek-by-jowl, no? Not so very surprising the Fed haven't since 2006 really wanted you to see this and understand what is happening. To spell it out one last time, if M3 (base money + credit money) is flat, while M1 (base money) is expanding ... that means credit money has been going to money heaven and been replaced by base money. Simples.


See also:
1) Wiki: Money Supply
2) Wiki: Fractional Reserve Banking
3) St Louis Fed M1 data
4) US Fed discontinued reporting of M3 on March 23, 2006. Can't think why.
5) ShadowStats still collate all the US money aggregates, including M3, even if the Fed won't show you their version of the same.
Posted by DP at 17:53

”In a healthy economy this isn't a big problem“

I think it is, but for other reasons regarding the perceptions of those using this money supply, and the way they feel about this money and thus the way they treat it, themselves and others as a result. These problems are legion and they are very real, but they manifest in feelings and behaviour rather than as an accounting problem.

The nominal vs the real.

”The credit went to money heaven“

”But, on the plus side, deflation and bank runs have been averted.“

A plus for the system only. Deflation and bank runs are the natural purge of the excess nominal in the system you describe, and thus are desirable from the POV of the participants in this system (if a little unpleasant) in order to maintain a link with reality. They purge the nominal fantasy. To avoid such regular corrections just leads to an unavoidable bigger purge later.

This was always a ridiculous system, and we have been fools for using it.

The awaiting purge (HI) to restore reality is now so big that it will collapse the system, and this is good. It’s the price you pay for living in fantasy for so long.

It’s not that hard to see is it, but one must recognize what fools we all have been for so long to do this... and this is the thing that most people cannot get past, IMO, to admit they were, and remain, to timid to observe that the emperor has no clothes.

I think it is, but for other reasons regarding the perceptions of those using this money supply, and the way they feel about this money and thus the way they treat it, themselves and others as a result. These problems are legion and they are very real, but they manifest in feelings and behaviour rather than as an accounting problem.

Yes, I completely agree. A poorly-chosen way to put it, on my part. I have since reworded. Thanks! ;-)

Your post is very good, and deserves a wide audience - there are a lot of people for whom this would cause a penny to drop. It reminds me of a couple of my own posts (Combustible Illusions and The Chicken and the Egg), but the thrust of your post would be that our system indulges in the practice of counting chickens before they have hatched.

People like these are all around you, and they all vote. They don't vote for a hard money system.

It's still not too late to break free.

I acknowledge that M1 isn't base money -- it contains a little credit. But it's close enough to illustrate the point, no? :-)