Today I was inspired, by the sun and by FOFOA's stick man video comment on a NeuralNetWriter thread, to take the kids to the park and build a den with them. 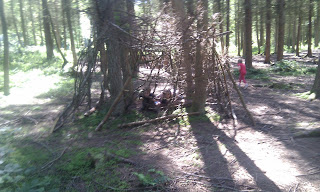 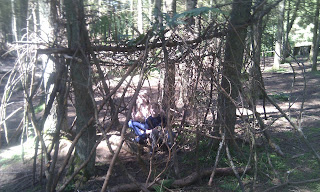 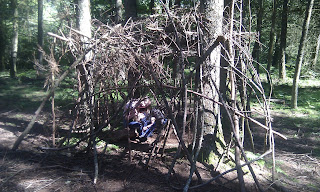 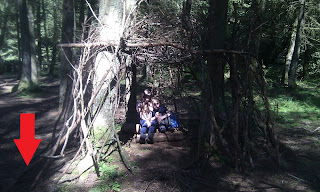 A journey of 1,000 miles begins with just one step, and a stick den is no different. The first stick, which in this case I have indicated in the final photo above using the big red arrow, makes all the difference and in this case the first stick was an upright at the corner with a branch sticking out from it at just the right height for my purposes. This stick leant against one of the four trees that we chose to build around and the branch sticking out was used to support the second stick: a beam running to the second tree and against which not only the sticks forming that side wall and the roof would later be supported, but also the second of the beams going out to the third tree would be supported by it too. At first, this forms a highly rickety and precarious structure that one has to support while others pass you the parts you need (NO! Not that one dumbass, THAT one!) but as you build on more and more carefully-selected and even more carefully-placed sticks, all supported by the ones that have gone before, eventually the thing does begin to have some integrity. It can finally stand alone without ones constant assistance, even when the wind blows and the kids keep carelessly bumping against it and banging their fresh supplies of sticks into the thing. Pesky little critters. All the help you can take, as expected.

After a half hour or so of jolliness, scavenging and construction, the thing was finally plenty safe enough to sit inside and eat lunch. Not very exciting really — unless you're 7 or 8 years old, in which case it's the most exciting thing since ... well the last thing you did.

Anyway, once the kids were finally inside I had a thought and smiled to myself. Rather like the $IMFS being built atop the first "dollar", which formed the base of the system that has been pyramided onto ever since, the whole thing is at the end of the day all being held up by that first carefully-selected and even more carefully-placed stick at the corner. Without the critical support of that first stick, it would all come crashing down in a second onto these unsuspecting children, and I would piss my pants laughing from a safe position outside. Oh, the deep and plentiful joys of parenthood.

I hope nobody ever decides to kick the stick holding up the $IMFS, to see if it brings the whole house of cards down, just because they can from a safe position.

That first dollar existed only because it in was turn standing on the solid ground of gold, and all the other tangible assets of the physical world.

And today... not such a secure regressive link to gold any longer. Think I
am happiest sitting outside this system too, thanks!

Without you
I will be
A better man...

Thanks for that link to the stick man thread DP. Lots of juicy stuff there.
egards
Ozzy

Indeed. There is plenty of juice to squeeze out of that site if you care to
look around. (Some of it is a little sour, unfortunately, but still ...
nothing's perfect, right?)

What did you make of FOFOAs stick man video analogy, specifically?

A little sour is ok; all things is moderation etc.
Need to balance the sweetness.

Specifically?
Errm, if you dont get freegold with the first read, stick with it?;0)

Firstly, you three do find a lot of cool and unusual vids.You must spend an unhealthy amount of time surfing utube.

As for the sticks. They were finely balanced for sure.But when he walked off, they were still there hovering in the still air.They only collapsed when the bloke that built it took the first stick away.
FOFOA seemed to imply that the stick(confidence in the dollar) would fall without any help.
The audience might not av been so impressed if the guy had stood waiting for ten friggin years for it to collaps on its own.
Thats what waiting for freegold feels like to me.Watching.Waiting.Seeing a fly land on a stick ,which makes it wobble, but stays there floating.......hovering......
And i ve only been a freegolder for about two years at most.
Regards
Ozzy

My take on FOFOA's use of the Stick Man, was that the entire $IMFS is built atop that first little stick (the dollar). The rest of the structure is built around that little by little, sort of like the Linux computer operating system being developed on the ... Linux operating system. Or the C programming language being developed in ... the C programming language. First you develop the basic kernel of the system using some more primitive tool (in the case of Linux, perhaps the kernel was first developed on Windows? ;P For C the first kernel of the compiler was probably written in assembly code I guess. In the case of the dollar it was of course defined by gold.)

As more and more of the system is constructed on top of, leveraging the previously-developed parts of the system to build more functionality I mean, the thing takes on the appearance of strength and resilience. But if you take away the kernel file that the operating system initially boots up from, you got nothing. Knock out the core libraries of your C environment, and all your millions of hours worth of lovingly and skillfully hand-crafted code ain't worth jack. Expose the dollar as being no longer able to deliver gold, the financial edifice instantly starts crumbling into a steaming pile of ... well, let's just say 'uselessness' for now.

If i knew anything about how this flat box thing i m typing on does what it does, i would probably thought that as well.

just one thing.You said "Expose the dollar as being no longer able to deliver gold, the financial edifice instantly starts crumbling into a steaming pile of ... well, let's just say 'uselessness' .
Surley that time went in 1971. Or are you talking about post freegold?
Back to my view on stickman,
Do you think TPTB will remove the last stick or wait for members of the audience to start throwing rotten fruit on stage?