So I figure I should crack out my own chart and scribble on it for a medium-term forecast that I can blame nobody but myself for, to see what I can come up with when I look at potential patterns on the graph and when I also take into consideration my macro view of the world around us currently. I figured anyone reading this blog is entitled to see it as well, why not? It's probably worth exactly what you're paying for it...

It seems to me that I should sum up my own macro view of the economic world around me before I head into the chart tools, because these big picture circumstances are probably the larger force that will shape outcome -- if I am going to be biased when I'm holding the crayons, it better be baised to my big picture view rather than something that I might like to see just because of what I happen to be holding today and hoping will make a chunk of change on it as a result. So here we go...

Macro view: There is massive debt in the world, debt that is going to be unpayable without something serious happening. That something serious will either be massive default of debts (serious monetary deflation) and a restart from a somewhat cleared slate at some point in the future, or massive monetary inflation and resultant currency devaluation that will make the currently-overwhelming debts seem a lot more manageable.

My current thinking is that it is likely there is a period of monetary deflation as many debts continue to be defaulted on (think property repossessions, people not being able to pay off their creditcard debts due to unemployment, etc), and this period is likely to occur in 2010, in fact likely imminently. Once people start to scream about the pain of another deflationary episode and its effect on the wider economy in general, governments will very likely restart the printing presses again (Quantitative Easing/money printing/monetary inflation/call it what you will) to magic up some currency to grease the gears of the economy and keep the voting public happy with them for a bit longer. This will devalue the currency already in circulation -- for example the case of the Pound, which has been heavily printed over the last year or so and is now worth approximately 25% less as a result.

The price of stuff you and I need or want to buy (like say food, fuel, clothing, gold, stocks and shares, bonds, pretty much anything else you might consider purchasing) is going to get lead around by these monetary forces, like a dog on a leash tracking you on a walk around the park -- it'll deviate from you at times while it goes for a sniff in the bushes and takes a leak against a tree or two, but it won't be able to get far away from you while it's on that leash because you're simply going to drag it back into line whether it likes it or not.

So, onto the technical chart then: I find Elliott Wave theory interesting myself, but this is something that is always subject to much interpretation and artistry -- it is very hard for anyone to get it right in advance, but it can be amazingly powerful if you do so. Basic support and resistance and trend lines are much easier to spot and use with some degree of accuracy, so these are also very useful tools. Fibonacci retracements are interesting, but to be honest I see them prove useless too often so I don't use them except perhaps to confirm something else I've noticed. These techniques (and many others) are all commonly used by financial chartists. If you wish to understand any of these techniques, I recommend you start with the hyperlinks in this paragraph, from where Pandora's Box will magically present itself to you. :-)

OK, let's get a chart of US$ gold price over the last year or so then, and see if we can apply any trend lines, support/resistance levels that might become relevant, and hopefully we can spot a feasible Elliott Wave pattern that might be instructive... here goes... 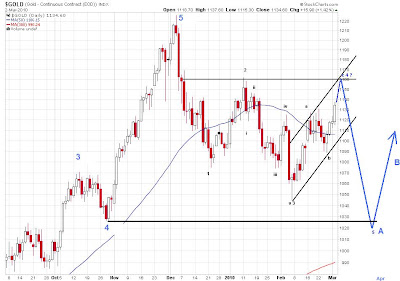 Hmm. So that's looks like a short term forecast from me of perhaps $1160, before a significant fall from there for a few weeks to complete a 1-2-3-4-5 Elliott Wave pattern that will form the A of a much larger A-B-C retreat. This in turn implies that to follow this there might be a sizeable price hike to form the B of that larger A-B-C, and then clearly some significant fall to complete the C of that formation.

I think I'll stay mostly out of gold for now then, and risk not making money on a possible big move coming if others are correct rather than me. It's much better than the risk of potentially losing significant amounts. This is in spite of the fact that I am a Pound-based market participant, and my feelings on the Pound are not good. The Pound gold chart is a whole other story, but it will certainly rhyme with the US$ gold story, like another dog on a different leash.
Posted by DP at 10:52